There is so much you can do with Redis but where and when to use it can be a bit of a puzzle to some. The Remote Dictionary Server (yeah that’s right, that’s what the word Redis stands for 😉) will incredibly increase the performance of your app by reducing the latency of your app’s reading and writing operations to a ridiculous less than a millisecond through millions of operations per second — yes, that wasn’t a typo.

Redis has a vast variety of data structures familiar to you to meet your application needs. It lets you store your application’s data as a string, list, hash, set, JSON…and more. And guess what? Redis is super easy to use. With Redis, you write fewer lines of code to store, access, and use data in your applications. Additionally, you can use the Redis API without worrying about managing a separate cache, database, or the underlying infrastructure.

But hey! Enough of how Redis can benefit my application. I am already in love. Pray, tell me then, what really is Redis? Relax…😉

According to the official documentation, Redis is an open-source, in-memory [key-value] data structure store used as a database, cache, message broker, and streaming engine. You can use Redis from most programming languages like JavaScript, Java, Python, C++, C#, Swift, PHP, etc.

Psst: This is just a high-level overview of Redis. To learn more, visit the official site.

Okay now please, and please, tell me what I can do with Redis 🥺. Sure, no problem! ✌️Redis use cases are as follows:

And so much more!

So, now, let me show you how to maximize the Redis caching feature to solve the business problem of fetching unique active users from a real-world application in real-time. That’s probably why you are here, isn’t it?

Let’s highlight the problem once more. You are expected to scrape a metric from a Prometheus client integrated into your Node.js application. This metric is a count of daily active users, that is, every user that explored your website at least once for the day. So, no matter if a user opens your website 1 or 1 million times a day, his activities on the website are recorded as 1 for the day.

In order to recognize that a user has already opened the site at least once for the day and thus not increment the counter the subsequent time he opens another protected route sooner or later that same day, we have to store the user’s information which we can use to validate the next time our application receives another request to a protected route. We do not want to store this information in our database. No way!🙅‍♂️ What we need is a caching system.👍

Redis to the Rescue!

Redis is the perfect solution. Using Redis caching, we will do the following on protected routes:

How you install Redis depends on your operating system. See the guide here that best fits your needs.

Let’s explore Redis with the CLI

After successfully installing Redis, open your terminal and execute the following command to start the Redis server.

That should result in an output that looks like this: 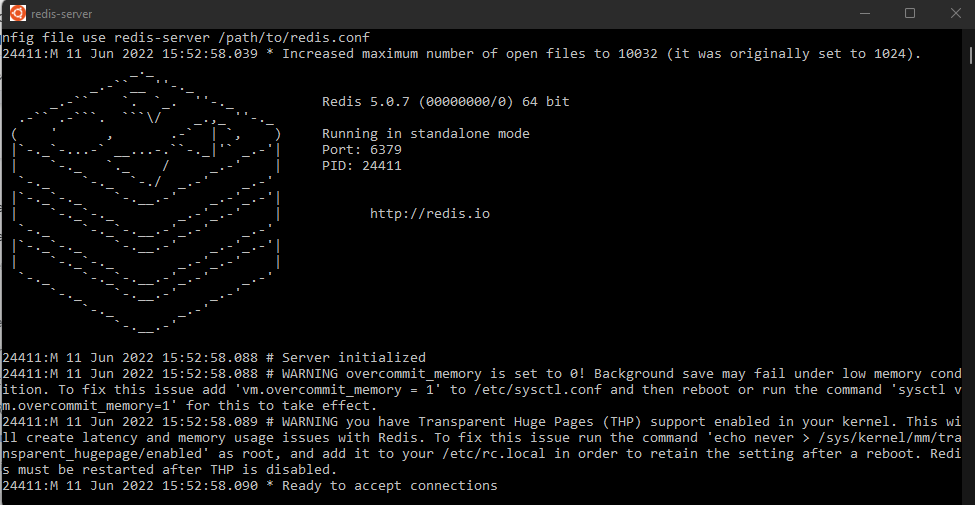 If you get an error, then you probably don’t have Redis installed or, for Windows users, you are not on a WSL terminal. Make sure to install Redis following the installation guide here. And if you are on Windows, make sure to open your WSL terminal. Then, try the command again.

Note that part of the information printed on your terminal says that Redis is running on port 6379 on your local machine. That is the default port number for the Redis server.

Now, while the Redis server is running, open up a new terminal and execute the following command to start the CLI and access Redis.

Now, let’s play around with some Redis commands. Type and execute the following command to get all keys matching a pattern.

Redis maps data to keys named by you at the point of storage. Think of keys as IDs for your data. To retrieve stored data, you have to pass a key. In the above command, if the pattern specified after the KEYS keyword matches a key, it returns the key or keys if the pattern is * which signifies “all keys”.

The above command should return an empty list or set message…unless you have some existing data stored in the past. So, let’s create a new one. Execute the following command:

SET is a keyword for setting new data. It requires a key name and a value Kenneth. Note that data stored like this are stored as strings. Now check that your key name exists.

You should see a list of keys including your new key name. But, what if I am interested in the value? I want to see the value stored with a key. The command for that is:

GET is a keyword for getting data. It requires a key, which in this case is name. This will output the value stored by that key. So, you should see Kenneth.

Our key (and value) will be stored forever because we did not specify an expiration time on creation. However, we can delete it using this command:

That should return (integer) 1 denoting that it was successfully deleted. But what if we wanted to set an expiration time for new data on creation? The syntax for that is:

SETEX sets a new key and value with an expiration time as the argument before the value. The expiration time has to be in seconds. Thus, the above command will set a new key called name and assign a value to it called Kenneth and starts a timer on it for 15 seconds. To get information about how much time is left to expire, the syntax is:

TTL stands for “Time To Live”. It requires the name of the key to which it should ascertain how much time it is set to live. Executing the above code again and again will produce different output as the time to live for the key (name) is counting down. Once it gets to -2, it means the key is gone.

As mentioned earlier, I will focus only on the part of the Prometheus code where the metric logic is implemented. When implementing Prometheus, I usually create a metrics.js file where I define my metrics. Copy and paste the following code snippet into your metrics file:

Usually, you would have a middleware that validates and verifies the request jwt token. For this, I would create a protect.js middleware file. It would contain my jwt verification logic. If the verification is passed, I would get the user’s id (which will have been used as the id required when issuing the jwt token) from the decoded token. Then, I would find the user whose id matches the decoded token id and attach the user’s details to a new property on the request object called user (so, req.user). Finally, the next() middleware in the stack is called.

All right, that’s just my opinion. But, however you designed your authentication logic, as long as you can get the user’s id from the request object, mount the following snippet:

This would create a new gauge metric with the name my_daily_active_users and some labels (year, month, and day) with a cumulative sample value of 1.

We can’t rely on our current implementation without the help of Redis because the sample value will keep increasing every time the same user uses a protected route and the dailyActiveUsersGauge metric is invoked. That would produce an inaccurate result at the end of the day. So, let’s use Redis to cache the user’s id.

Create a file in your project folder (I would call it redisCacheHandler.js) and paste the following code into it:

Now, go back to where we implemented the dailyActiveUsersGauge function and modify your code as follows:

The above implementation will make sure that we have an accurate daily users count as the counter will only increase if there is a new user or new key thanks to Redis.

On your Grafana dashboard, create a new panel and structure the Prometheus metrics browser like this:

Redis is a potent tool that can be leveraged almost anywhere in your web applications. Hopefully, this text has been helpful and more importantly an eye-opener to the power of Redis.